Miami: Your Urban Playground On Miles and Miles of Golden Powdery Beaches

The Kardashians call Miami home for good reason! Miami, Florida, is the United States’ urban playground on the beach, complete with tropical days and spicy nights. Ranking at or near the top of many exclusive city lists — including cleanest and richest — Miami is a hugely popular destination to both live and play in. Throw Latin and Caribbean music, food and culture, beautiful people, unrelenting sunshine, golden powdery beaches and a raucous nightlife all into a pot and stir — and there you have this South Floridian city that attracts millions of tourists from all corners of the world. 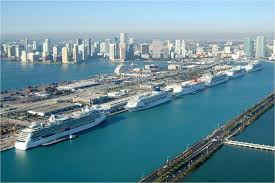 Downtown Miami is divided into four distinct areas: Uptown, Park West, Brickell and the Central Business District. Steel and glass skyscrapers and luxury condos mingle with downtown’s Port of Miami where over 3.6 million cruise ship passengers dock each year. Miami Beach, along with South Beach, is world renowned for its swanky hotel strip, A-list bars and clubs — and of course its pristine beaches dotted with swarms of beautiful people. Located just west of downtown, Little Havana is one of Miami’s ethnic enclaves where everything Cuban can be found. The well-known street Calle Ocho is home to authentic Latin shops, restaurants, markets and clubs. 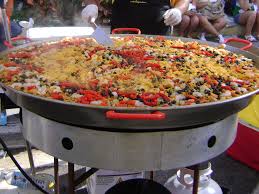 If you’re looking for the best Cuban food within the continental U.S. or a pulse-pounding salsa club on a Monday night, you’ve come to the right place. World renown for its beaches, check out South Beach, Miami Beach or Lummus Park for a guaranteed no holds barred party by the Atlantic. Art lovers will rejoice over the bevy of galleries and museums that display and sell local and international artwork. While completely family-friendly during the day with zoos, aquariums, family beaches and parks, Miami becomes an adults-only wonderland once the sun goes down.  With an endless supply of bars, clubs, tattoo parlors and a general surge of hedonism, this town is fast, fierce and fun. 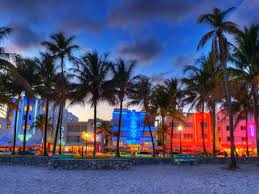 Miami is heralded as the American home of New World Fusion cuisine. Whether you’re a chef, foodie or hungry tourist, the robust flavors of the city’s Latin- and Caribbean-inspired restaurants will leave any palate excited. With house specialties like bistec uruguayo (breaded steak filled with ham and Swiss), fried snapper and mojo chicken, it won’t get more authentic than the Cuban food at Islas Canarias in Little Havana. Joe’s Stone Crab is a Miami Beach staple, notorious for their sweet stone crabs and key lime pie. For Spanish-Mediterranean fusion serving tapas dishes such as ginger-soy sea urchin and sweet-and-sour pork belly, Sra. Martinez is a trendy and delicious choice located in the heart of Midtown Miami. 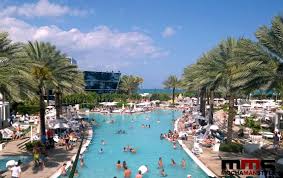 Located just west of the city, Miami International Airport (MIA) is not only an important hub for North America, Latin America and Caribbean travel, but is also one of the largest airports in the world. Though there are an abundance of six-figure sports cars all over the Miami streets, the city’s public transportation system is an inexpensive and efficient way to get around for visitors. The Miami-Dade Transit bus system covers the entire county and connects to Fort Lauderdale as well. The Metrorail and the Metromover (which is free!) are both great ways to navigate through different regions of the city, including Downtown, Coconut Grove and Coral Gables. Taxis are fairly expensive in Miami, yet convenient for short trips and need to be called and reserved ahead of time. 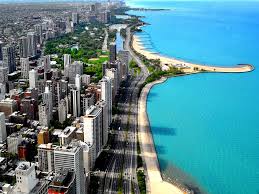 Miami has a subtropical climate with hot, humid summers and dry, mild winters. July is the city’s warmest month, with average temperatures around 90° F (32.2° C) and daytime lows hovering in the mid-70s. In addition to being the driest months of the year, winter has pleasant temperatures ranging in the high 60s to low 70s. January is the coldest month, when the average overnight temperature drops to 59° F (15° C). Most precipitation is seen during the rainy season of June through September, when the city can receive up to eight inches of rain per month. The best time to visit Miami is during the winter months, when the humidity is down and the weather is sunny and warm. 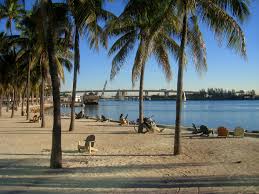